A Temporary Exhibition Within The Permanent Exhibition. Museums Make Connections. 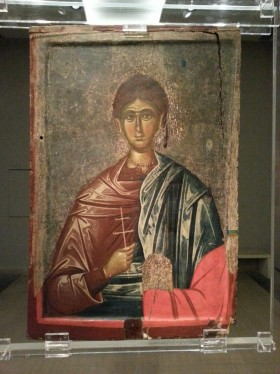 The extrovert communication policy of organizing exhibitions that highlight objects outside of their collections has become an established practice of museums internationally. The benefits are many: the promotion of scholarly knowledge, of research and documentation, the recontextualization of the archaeological items, the cooperation and networking of museums, but most importantly, the increased accessibility.
The Byzantine Museum ―often involved in exhibitions related to Byzantium that are organized worldwide― participates in the temporary exhibition Heaven and Earth: Art of Byzantium from Greek Collections by lending 28 major exhibits from its permanent exhibition.
But how does a large museum react to such mobility? Does the movement of the objects merely mark an absence or is this an opportunity for a more complex management? The Byzantine Museum chooses to handle this issue either through partnerships, i.e. by presenting unique objects from other museums, or through the display of masterpieces from its unknown collections. Eight very significant Byzantine icons are selected from the Kastoria Museum in order to replace the missing works, while important objects that for various reasons had not been included initially in the permanent exhibition are now retrieved from the Museum's archaeological storages. So a new display is developed temporarily inside the permanent exhibition, that not only supports the existing interpretive framework but it also offers new readings to the public.
Some archaeological objects, sculptures and icons of unique importance have been replaced by museum copies. Copies allow the visitor to acquire a sense of the original exhibit, without changing the museological and interpretive context of the exhibition. The excellent copies, which have been created by artists-conservators who belong to the Byzantine Museum personnel, augment the museum's collection of copies.
In place of the Minor Art items that have moved, the Byzantine Museum displays exact copies  tree-dimensional images of the items i.e. holograms. In order to produce the holograms the Museum initiated an important collaboration with the Hellenic Institute of Holography. This technique, which is used in a museum for the first time globally, is not intended to conceal the absence of the original item but to reproduce the third dimension, missing in every other visual media such as photography.
All new items, originals, copies and holograms are distinctly marked.
The exhibition «Heaven and Earth: Art of Byzantium from Greek Collections» is presented by the Hellenic Ministry of Culture and the Benaki Museum at the following dates and places: National Gallery of Art, Washington D.C. (October 2013 to March 2014); J. Paul Getty Museum, Los Angeles (April to August 2014); Art Institute, Chicago (August 2014-February 2015).