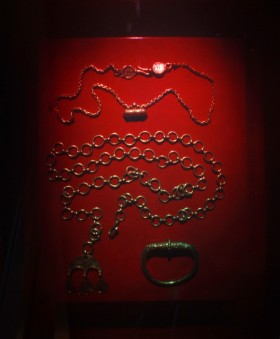 The use of display holography for visual recording of objects of cultural interest and their further presentation to wide public has already been applied on multiple occasions since the early 80s. Scythian treasures, religious relics, archaeological and anthropological findings as well as historical works of art have been made available for holographic recording from famous Museums such as the British Museum in London or Hermitage in Leningrad of the (then) USSR. However, the limitations of the technology at that time and in particular the lack of realistic representation mostly on account of their monochromatic image did not allow the further establishment of their use in spite of the early expectations.
The Hellenic Institute of Holography (HiH) has proudly announced at the latest OPTO2014 conference (San Francisco, USA, part of SPIE Photonics West) the implementation of its HoloCultura programme in the holographic recording of original artifacts of the Athens Byzantine & Christian Museum (BXM). For the first time in Greece but equally in a world's first full-colour holograms recorded in situ with the use of proprietary portable equipment are being exhibited as part of the permanent collection of the Museum in the place of original objects for the period that these are on loan abroad. Within the framework of its various collaborations with third-party organizations, the Byzantine & Christian Museum of Athens  has cooperated with HiH in order to document in the most scientifically advanced way selected objects from its collections, a part of the Museum's contribution in the largest ever exhibition of Byzantine culture taking place in the USA during this year. According to scientific evidence, analogue full-colour holography is today the most ultra-realistic way of three-dimensional imaging of objects at such a degree that Optical Clones (OptoClones) can convincingly substitute for the original exhibits. The originality, however, of this project lies in the fact that the holograms currently exhibited in the halls of Byzantine & Christian Museum were not recorded in laboratory conditions but in the Museum itself with the use of the unique holographic camera ZZZyclops developed by HiH. At the same time, Byzantine & Christian Museum equally demonstrates its innovative philosophy by exhibiting to public in a very elegant yet impressive way Optical Clones of important items from its permanent collections. At a time of ever increasing digitization of the world's cultural heritage and use of digital presentation media, it is important that Byzantine & Christian Museum makes a museological choice in favour of analogue media for the visual presentation of original artifacts, by focusing on the immediacy and the indelible impression that only holograms can offer to every visitor. As emphasized by the Museum scholars, in this way an unforgettable experience is imprinted in the memory of visitors of every age, while at the same time various practical complications usually associated with the use of digital technologies are avoided.
It is worth noting that, for the chromatically correct and realistic replay of the holograms, specially developed by HiH illumination systems are also used. These intelligent illuminants marketed as HoLoFoS have been incorporated to the exhibits by the renowned Greek industrial designer Yiannis Georgaras (Red Dot Award 2013) in cooperation with the relevant services of the Museum, responsible for museographic aspects. Judging by early visitors' reactions, the overall result fully confirms the expectations of the Museum decision-makers as well as the efforts of the HiH experts. In an incredible way, the original objects seem to have left behind their optical footprint for as long as they travel across the globe. Their three-dimensional Optical Clones (OptoClones) depict perfectly the detailed texture and colour tonalities of the objects, faithfully reflect light according to the viewing angle whereas natural shadows and perspective full-parallax enhance the perception of depth and realistic "presence". In such a convincing way that the relevant press release of the Museum feels the need to draw the attention and alert the public on the absence of the original exhibits!
These ultra-realistic holographic OptoClones are recorded on special high-resolution panchromatic light-sensitive glass plates in a way reminiscent of the early days of photography. For this, the HiH needs to transport its proprietary equipment in the premises of the Museum, where the objects are positioned on an anti-vibration fully-protected setup by the responsible restorers. When ready, the objects are illuminated by white laser light of very low intensity passing through the holographic glass plate. The light wave front reflected by the object is captured on this light-sensitive plate, which is subsequently chemically developed and processed. The unique analogue hologram obtained in such a way, when properly illuminated, replays the recorded object in real 1:1 scale and in every detail, at a degree of convincing reality practically indistinguishable by the human brain.
The OptoClones are not generated only for the virtual exhibition of works of art but they are mainly meant for the documentation and visual recording of their condition before/after conservation, before/after loan, for their comparative scientific study, for educational purposes and several other advance applications necessary for any modern Museum or private collector. Naturally, conventional two-dimensional photography of holograms (such as those seen on this page) cannot represent and communicate the real full-colour impression neither the analytical detail that only physical visual observation can offer. Therefore, one should not miss this unique opportunity to see them "live" by paying a visit to the Byzantine & Christian Museum, one of the most elegantly and interesting Museums of the city of Athens.
The exhibition of OptoClones will last for the period which the original objects are on loan, which is estimated through October 2014, according to the present schedule. During this time, the Byzantine & Christian Museum of Athens ―always pioneer in the adoption of innovative technologies for the conservation, restoration, presentation and further dissemination of its unique and varied collections plans to organize a program of guided tours targeted to specialists and general public with the support of HiH as well as a series of informative public lectures.
Alkis Lembessis
THE HELLENIC INSTITUTE OF HOLOGRAPHY