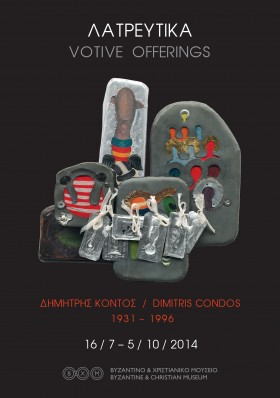 The votive offerings by Dimitris Condos (1931-1996) is a group of 14 works that has been presented for the first time in the art Gallery Desmos in March 1975. The artist chose to work on the synthetic dipole icon and valuable devotional offerings, primarily jewelry in several variations, in order to comment on current political and social issues.
The exhibition is enriched with a group of votive offerings from the Byzantine & Christian Museum Collections. The Christian offerings on display together with the works of Dimitris Condos and in dialogue with them show in a very eloquent way the relationship between the prototype and the derivative artistic production.
The exhibition highlights also all the artistic variations that Condos proposed on religious matters, in order to fully cover the topic and to explore new ways of expression on the historical footsteps of the Byzantine tradition.
A search in his workshop and in his archive brought to light sketches and drafts dated from the second half of the sixties (1965-1968), that were made for the decoration of the church of the orphanage in Ano Glyfada, a work that ultimately did not materialize. Other works on display are sketches of imaginary architectural types of churches, individual studies on religious themes and iconographic types, and finally, an engraving on linoleum depicting St. George that was made in 1978.