Salvador Dali, the myth of surrealism 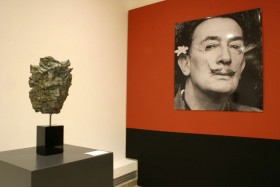 In 2007 the Byzantine and Christian Museum brought the Greek public closer to the great Spanish surrealist with the eccentric personality, by exhibiting works that have never come to Greece before. This pioneering exhibition was part of the policy developed by the then Director of the museum, Demetrios Konstantios, aiming to broaden the scope of the temporary exhibitions of the museum. It marked the beginning of a systematic approach to the modern and contemporary artistic fields. Its curators were art historian Athena Schina and Pick Keobandith, doctor of History of Art and director of the QuArt house.
The exhibits were 24 sculptures, 12 originals from brass, some taller than 2 meters, 12 multiple, as well as 12 works of lithography. In them one could discern the influence of Ancient Greece on Dali (Athena and Hermes were his models), his love for nature (flowers and symbols dominate his lithographs), but also his deep religiousness (sculptures of Christ).
The exhibition for Salvador Dali created a huge interest in the Greek public. It had around a hundred thousand visitors, an impressive number given the exhibition's duration. Certainly, the extensive coverage it enjoyed in the press and electronic media contributed to this very positive outcome.