A Lasting Faith: Orthodoxy in the Holy Land 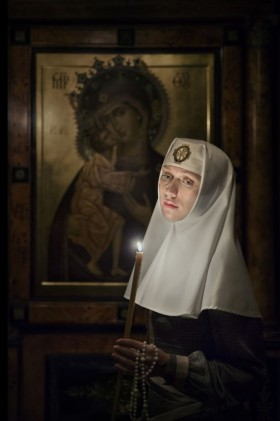 Born in the Holy Land, the cradle of the monotheistic religions, Christianity has maintained a constant presence in the area since the first day of its inception. Twenty centuries later churches, monasteries and convents of all denominations are still part of the natural landscape either in the heart of cities, hilltops or in remote desert regions. The Orthodox Church is fundamental part of this presence on those sacred grounds, where Christianity was born, and its institutions, the monks, priests, nuns and pilgrims are integral part of the human landscape of todays Israel and the Palestinian territories. Its unwavering faith and the traditional rituals perpetuate the centuries old tradition of Orthodoxy.
Israeli photographer Dafna Tal was fascinated by this presence and was drawn to conduct an in-depth documentary project over the past three years. In a series of exceptional photographs she captured with utmost clarity not only the faces of the members of the Orthodox communities but also, through a deep understanding of the essence of Orthodoxy, the spirit of these secluded places seldom accessible to the general public.
In the process, and because of her open and winning personality, she obtained the trust of the Orthodox Patriarchate and as a result was granted an unprecedented acceptance among all the communities, churches and convents which enabled her to penetrate their sacred and secret world not only visually but also emotionally and engendered images of extraordinary clarity and beauty. The seemingly unconditional cooperation of the people photographed was supplemented by her deep understanding of these special closed communities.
A virtuoso of lighting and composition, in her photographs, either individual portraits, group photographs or images of atmosphere, Tal succeeded to capture and reflect the quintessence of the sanctity of the two thousand years old and unchanged tradition in its full splendor in inspiring images that convey the depth of the Orthodox faith and devotion.
Thus, Dafna Tals unique photographic document sheds a new and contemporary light on the largely inaccessible world of Orthodoxy. While opening a window to this hermetic world, at the same time these photographs pay tribute to the strength of the lasting faith of Orthodoxy in its natural environment: Jerusalem and the Holy Land, the eternal home of Christianity where all begun.
Dr. Nissan N. Perez
Curator
Jerusalem, Israel