Fotis Kontoglou from Kydonies: by his hand and imagination 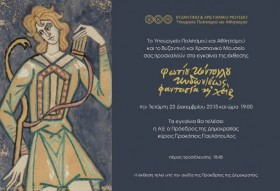 In 2015, the Byzantine & Christian Museum is honouring Fotis Kontoglou (1895-1965) on the 50th anniversary of his death; the Museum dedicates to the artist a major retrospective exhibition that presents Kontoglous multifaceted contributions to 20th-century Greek culture as an artist, a painter of religious and secular works, a writer, a critic, a colour researcher, a conservator.
The retrospective was decided because of the artist's personal and artistic ties to the Museum: he collaborated and worked here as a painter, copyist and conservator during the twenties and thirties; many works by him, and now also his personal archive are kept in the Museum; most importantly, Kontoglou researched deeply and served Byzantine and Post-Byzantine Art.
Besides, the peculiar artistic idiom of his is clearly inspired by his view that the Byzantine and Post-Byzantine Art are part of an uninterrupted painterly tradition of Hellenism. Kontoglou is the artist who dared and succeeded in reviving a defunct artistic idiom, imposing it as a living and vivid painterly language.
The exhibition proceeds mainly chronologically, divided into five sections; four of them cover his lifetime (1893-1965) while the fifth presents his longtime relationship with the Byzantine and Christian Museum from the twenties onwards.
EXHIBITION SECTIONS
 1895-1923: It follows the artist from Ayvalık where he was born, to Europe, to Ayvalık again, to the Asia Minor Campaign, to Mytilene, to Athens. The artists European journey is presented through selected artistic examples, through his first novel Pedro Cazas (Paris, 1918), and through mementoes from his life in Paris.
 1923-1930: Following the Asia Minor Disaster, focus is given both on the cycle of the intellectuals that embraced Kontoglou after his arrival in Athens, as well as on his artistic and written production. His journeys all over Greece allowed him to indulge in Byzantine, Post-Byzantine and Modern Falk Art and evolve as an artist; they are represented through drawings, copies, articles, and by his book Taxidia (Journeys), 1928.
 1930-1940: In the early thirties Kontoglou was employed by the Byzantine Museum as conservator and copyist while he participated in the restoration of monuments. Copies and archival material describe the activity. Two works by Kontoglou and his pupil Nikos Engonopoulos, copies of the figure of St Euphrosynos from a wall-painting in a Monastery in Meteora, dated between 1932-1934, unknown until now, prove Kontoglous influence on his pupils.
In the same section there are drawings, paintings and archival material concerning three large-scale secular works that Kontoglou executed during thirties (the Kontoglou residence, the Turkish bath Pissa-Papaeliou, and the Athens City Hall). Articles and the book Astrolabe (1935) indicate his written production of the period.
 1940-1965: From the Second World War and the German Occupation era, two important religious paintings are shown (1941) and also, publications, drawings, and illustrations. Kontoglous recognition as a painter and his connection with Orthodoxy in the Postwar period is presented by sketches, models and archival photographs associated with the ecclesiastical decoration projects that he undertook in Greece and abroad.
 Fotis Kontoglou in the Byzantine Museum: His employment, his works kept into the Museum, a large number of documents from his personal archive that was donated to the Museum in 2014 by the artists grandsons Panagiotis and Fotis Martinos, as well as his icons from the Loverdos collection, also kept in the Museum, are presented and discussed extensively in this section.