"Armenia. The spirit of Ararat from the Bronze Age to the 20th century" 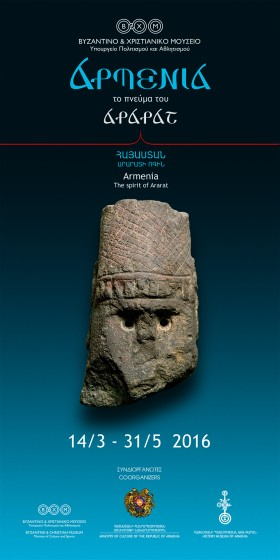 The Byzantine & Christian Museum hosts for the first time in its halls a historical exhibition of archaeological findings and cultural treasures of Armenia. One hundred and four objects from the Yerevan History Museum become witnesses of the history of Armenians since prehistoric times and highlight their Hellenistic and Byzantine past ―the Armenians were subordinates to the states of Alexander the Great and his successors, and citizens, allies or friends of the Byzantine Empire.
The exhibition presents important objects dating from the 2nd millennium BC up to the beginning of the 20th century AD. Statuettes dated from the Bronze Age (2nd mill. BC-10th c. BC), a variety of archaeological finds from the Urartu civilization and the kingdom of Van (9th-6th c. BC), coins from the Hellenistic, Roman and Byzantine periods (4th c. BC-12th c. AD) outline the Ancient and Medieval Armenian world. At the same time, various ecclesiastical items, vestments and vessels, and also manuscripts and old printed books outline the Christian life of Armenians. Samples of secular life such as costumes, jewelery and carpets, presenting the Armenian culture from 17th to 20th c. AD. The exhibition is completed by visualized archival material related to the Armenian Genocide (1915).