Andrei Rublev''s, the icon of the Ascension 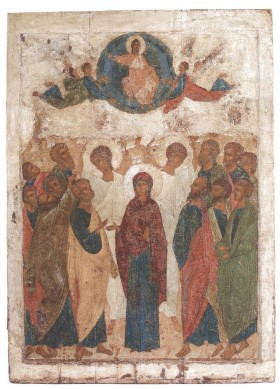 The icon of the Ascension, painted by the famous Russian religious painter Andrei Rublev in 1408, came from the Tretyakov State Gallery to the Byzantine & Christian Museum to be displayed from June to September 2016. It is a forerunner of the works from the Tretyakov State Gallery and the State Hermitage Museum that will be exhibited at the Museum within the cultural activities celebrating 2016 as the year of “Russia in Greece and Greece in Russia”.
Saint Andrei Rublev, a monk and God-inspired religious painter (late 14th century-circa 1430), is a symbol of the Orthodox Russian art. His works, revealing high artistic charisma and ascetic spirituality, are among the most splendid examples of Russian religious painting.
The exhibition was sponsored and co-operated by Prometheus Gas, a company of Gazprom and Copelouzos Group.