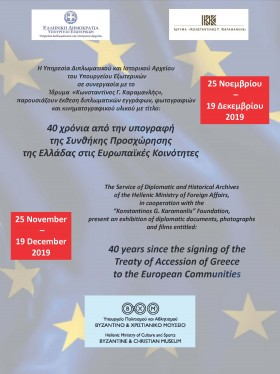 Upon completion of 40 years of the signing of the Treaty of Accession of Greece to the European Communities, the Service of Diplomatic and Historical Archives of the Hellenic Ministry of Foreign Affairs, in cooperation with the Konstantinos G. Karamanlis Foundation, present an exhibition of documents, photographs and newsreels from the period of the relative negotiations (1975-1979). The signing of the countrys Treaty of Accession to the EC on May 28th 1979 constitutes a major event in the history of Greeces participation in the process towards European integration, which started right after World War II.
The exhibition is a proof of the intensive diplomatic activity of the Greek government and of Prime Minister Konstantinos Karamanlis in order to achieve an important and difficult goal. The archival material of the exhibition comes from the Diplomatic and Historical Archives of the Greek Ministry of Foreign Affairs and the archival collections of the Konstantinos G. Karamanlis Foundation. It includes more than 100 documents and photographs, as well as 45 minutes of film (mainly newsreel footage), depicting and describing the meetings and discussions with the leaders of all the (then) member-states and the European Communities institutions. The audiovisual material has been combined with the documents, so that the visitor may have an overall sense of the times and events.
The exhibition takes place at the Byzantine and Christian Museum and will be open from 25th November until 19 December 2019.