The Duchess of Plaisance: The History Behind the Myth 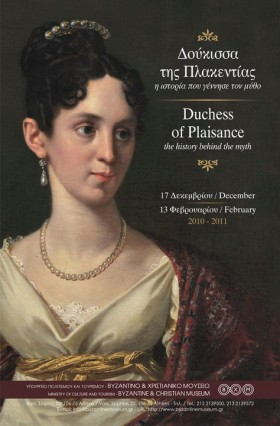 Sophie Barbé de Marbois, Duchesse de Plaisance (1785-1854). Ηow many people know the name of the Duchess of Plaisance? The Athenians, who dubbed her the Duchess of Piacenza in the mid-19th century, were in awe and fear of the noblewoman and wove a dense fabric of myths around her life. It is this fabric that the exhibition at the Byzantine and Christian Museum hopes to unravel by shedding light on lesser-known aspects of the Duchess of Plaisance herself and her activities in Greece. Her American ancestry and married life in France, her decision to settle in the Athens of King Otto (Othon), and her activities as a philanthropist and businesswoman are presented through art-works, archive material and contemporary eye-witness accounts. Finally, an exhibition such as this could hardly fail to include almost all the novelistic accounts of her life that would follow, feeding into her celebrity and, more significantly, keeping her legend alive.