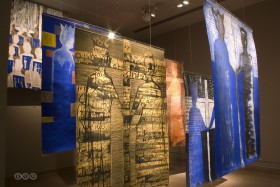 Lefteris Olympios exhibition Facing Byzantium contains selected works representative  of his artistic creation (1993-2012). It is also a response to an important aspect of art:the contemporary artistic idiom can reformulate religious iconographic themes in a fascinating way.

Olympios painting is experiential. Experiences and personal philosophy are expressed through the assimilated Byzantine tradition and the deep knowledge of ecumenical religious iconography.

Olympios usually creates thematic series. In "Hospitality", which initiates from a Byzantine icon of the 14th century, Abrahams Christian hospitality is taken out of its religious context and is clothed in the artists memories. The Journey is the Flight from Egypt, but also the flight of the refugees, and the journey of wandering. In "Virgins of Beauty," Vingin Mary, a symbol of Christianity, becomes the symbol forwoman. "Matter of choice" is proof of Olympios flawless technique, in the abstract way of depiction, in the use of colour, in the studious rendering of composition.

Olympios works are inspired by Byzantium, not just in their adoption of religious themes, but also because they carry within them the profound spirituality of the Byzantine era.