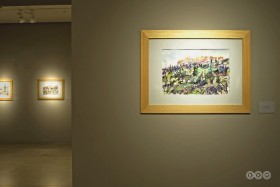 Many of the Byzantine and post-Byzantine monuments of Athens were lost during the years of the formation of the new capital (19th c.), or in the process of revealing the antiquities of classical era. A specimen of measure and harmony, remnants of the medieval past, the surviving Byzantine and post-Byzantine churches of Athens are the link between the ancient and the modern city and inspire artists to the present day.
The painter Kostas Papastamoulis, following the practice of painting historical sites, which refers to a long artistic tradition, focuses on his recent works on the Akropolis rock.
He depicts the site as seen from every corner of the city, at any time of the day, in different weather conditions, and links his main subject with the Byzantine, post-Byzantine, and Ottoman monuments.
The exhibition is accompanied by photos of the 19th century from the Historical and Photographic Archives of the Byzantine & Christian Museum (Collection of Christian Archaeological Society). They are mainly shots of Georgios Lambakis (1854-1914), a pioneer in the rescue, survey and study of Christian monuments. The dipole photograph-painting reveals in the best possible way the uniterrupted course of Athens during the centuries.
Contributors to the Exhibition
General Coordination: dr Anastasia Lazaridou
Curators: Ioanna Alexandri, Vassiliki Chorti
Architect: Spyros Nasainas
Editor: dr Jasmin Moysidou
Graphic Design: Yannis Stavrinos
Photo Editor: George Soupios
Public Relations-Promotion: Katerina Choina, Magda Zindrou
Technical Support: George Korkovelos, Dimitris Margaritof, Ioanna Stefani, Artemis Kambouraki, Vassο Papakosta, Evi Stamouli, Spyros Xepapadakis, Petros Kalophonos
Lighting: Yannis Tsonis
Painting: Dimitris Tsekouras, Dionyssis Philimegas
Video: Véronique Magnes