When Elephants Fight, It is the Frogs That Suffer-A Sonic Graffiti 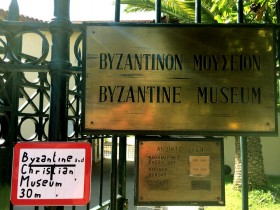 Τhe Documenta 14 presents the work of Ben Patterson When Elephants Fight, It is the Frogs That Suffer-A Sonic Graffiti  at the Byzantine and Christian Museum (Gardens).
The installation consists of 16 loudspeakers playing a symphony of frogs croaking. The sound archive is made of a) frogs croaking  b) human voices imitating frogs croaking c) human voices reciting proverbs d) human voices reading parts of Aristophanes play Frogs. Both Aristophanes Frogs and Ben Patterson's earlier work Pond have influenced the development and the artistic result of this work.
Ben Patterson was born in 1934 in Pittsburgh (USA). After his musical studies at the University of Michigan he has been one of the most important experimental artists of Fluxus, a movement that flourished at the end of the 1950's and the beginning of 1960's. He participated at the opening of the Fluxus Museum 2008 in Wiesbaden.
Ben Patterson died in Wiesbaden in 2016.