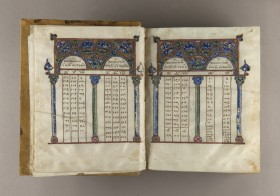 A Byzantine New Testament Manuscript of significant archaeological and artistic value, belonging to the Dionysiou Monastery, Mt Athos, is currently in display at the Byzantine & Christian Museum, after having returned from the J. Paul Getty Museum, Malibu, CA, where it had been kept for decades.
The manuscript belongs to the Library of the Athonian Monastery. It disappeared in spring 1960, but the incident was not made known to the Ephorates of Antiquities. After its acquisition by the J. Paul Getty Museum in 1983, it was displayed, studied by scholars and became renowned as New Testament MS Ludwig II 4.
Within the framework of the collaboration between the Hellenic Ministry of Culture and Sports and the J. Paul Getty Museum, and on the occasion of the great Heaven and Earth exhibition, the American Museum consented to the manuscripts return to its homeland.
The luxurious parchment codex was copied and illuminated in Constantinople in the year 1133. The name of the main scribe is also known to us: Theoktistos. The manuscript can be associated to a significant number of similar high-quality 12th- century codices, ordered either by members of the Komnenoi imperial family or by rich monasteries abbots.
Today the manuscripts illumination includes twelve canon tables, six ornamental headpieces and four full-page miniatures depicting evangelist portraits. A fifth, full-page miniature with busts of the twelve apostles, once detached and until recently displayed in the permanent exhibition of the Paul & Alexandra Canellopoulos Museum, Athens, has finally joined the main body of the manuscript, in the display-case of the Byzantine & Christian Museum.
After their presentation at the Byzantine & Christian Museum, both the manuscript and the detached miniature will return to their home-place, the Library of the Dionysiou Monastery on Mount Athos.