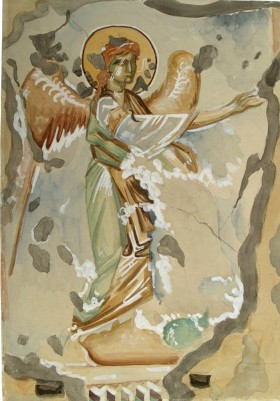 In this section the relationship between Byzantine culture and various forms of modern art will be presented in temporary exhibitions.

Questions of faith, religiousness, the metaphysical dimension of Byzantine art, the political management of faith in the modern world, the role of Orthodoxy in our time balancing, the symbolic power of religion and the clash of faiths with the atheistic 20th century are just some of the important subjects which preoccupy the modern-day artist and are involved in artistic debate at various levels.

Spirituality, abstraction and expressive simplicity are some of the general characteristics of Byzantine art which made an impression on the modern artist and inclined him to study it. However, more specific stylistic features, such as the use of colour, line, light and reverse perspective, also influenced the work of these modern artists.

The wide-ranging and complex dialogue between modern-day artists and Byzantine art shows the overwhelming influence of the Byzantine civilization as an enduring and substantial social, philosophical, political and artistic phenomenon.