IV. From Byzantium to Modern Era 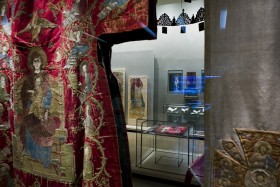 The gradual loss of Byzantine territory began as early as the 11th c. but gained momentum from 1204 onwards, culminating in the final loss of Constantinople in 1453. This process helped to create a complex social and political system in the Eastern Mediterranean region.

The populations who lived in Byzantine territory, whether Greek or otherwise, experienced these gradual but decisive changes in a variety of ways. In the Venetian-held areas living side by side with Westerners led to the creation of new social and cultural structures: Byzantine tradition and the Greek language encounter, sometimes with glorious results, the beginnings of the European Renaissance.  This is evident in the urban centres of Crete and the Cyclades, the Ionian Islands and the Peloponnese.

On the other hand, in areas which came under Turkish rule, the local populations become part of the administrative system of another empire. Under this regime all the "Rum" (Romioi, i.e. the  mostly Orthodox  Christians, regardless of ethnic origins or language) were subjects of the Ottoman sultan with the Ecumenical Patriarch as their religious leader. In those days the Orthodox Church was an institutional part of the Ottoman state. At the same time it was a point of reference for the Christians: a nexus preserving Byzantine tradition, Greek Orthodox instruction and the Greek language, which would go on to contribute to the creation of a Greek national identity.