Wall-painting with the Virgin of the Catalans (01111) 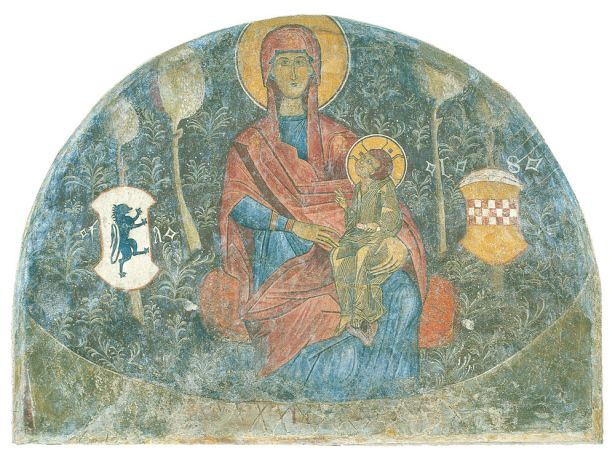 The Virgin and Child are depicted seated on a cushion in a paradisiac landscape. To left and right are depicted two coats of arms.  The Latin initials F-A and L-S have been identified with the names of Francesco Acciajuoli, Duke of Athens (1451-1460) and the Genovese nobleman Lorenzo Spinola. Perhaps the wall-painting was commissioned for the church of the Genovese community in Athens.  Initially the scene was known as the Virgin of the Catalans, as it was thought that the coats of arms belonged to the Catalans who ruled Athens in the 14th century.  The wall-painting was found in 1849 in the ruins of the derelict church of Prophet Elijah, near the ancient Agora in Athens. It may have been situated above the entrance to this church. It belongs to that category of works from the period of Frankish occupation known as "Franco-Byzantine", because they combine Byzantine tradition with elements of Western art.