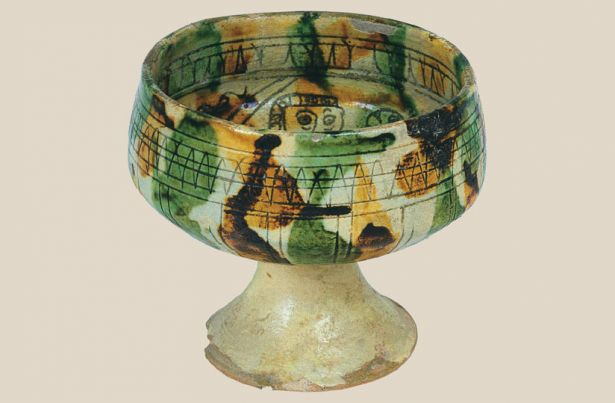 The foot of this glazed, ceramic bowl is elevated on a splayed ring and its rim is vertical with a lip rolled over at an angle with the body. On the inner surface sgraffito decoration: in the well is a male figure with a sword and shield and holding a bird (probably a hawk) on his hand.  Rosettes decorate the ground.  The external surface is covered with parallel lines which, around the rim, are intersected by a zigzag line.  The glaze on inside and out has a greenish tinge and traces of ceramic tripod stilts (see no. 7) have survived in the well.
This vessel is an example of the wares from the ceramic workshops of Cyprus, which produced glazed ceramics, for the most part with sgraffito decoration.  They began production in the early 13th century and their highpoint was the 14th century. Throughout the period of Venetian rule (1489-1572) they show signs of decline. Archaeologists have identified ceramic workshops in the village of Lemba in the Paphos district, in Lapithos, near to Kyrenia and in the Engkomi district, near Ammochosto. This particular dish is dated to the 14th century.