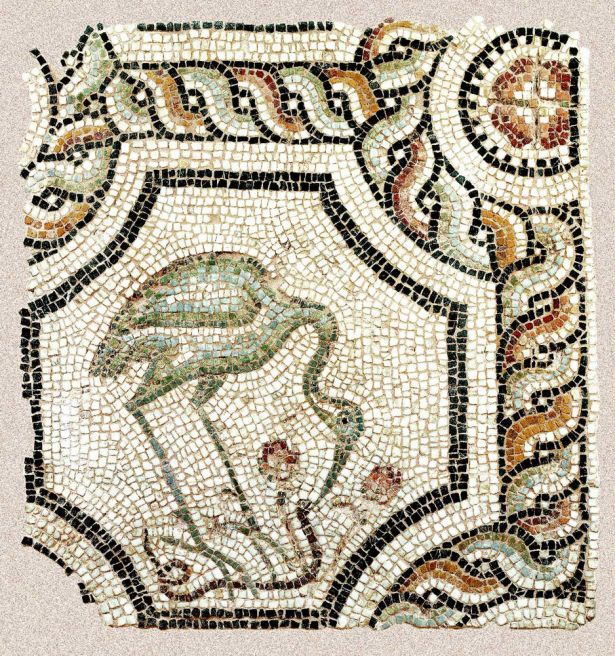 The fragments of a mosaic floor come from what is known as the Ilissos basilica, one of the most important Early Christian basilicas in the city of Athens.  They came to light in the excavations carried out on this monument by George Sotiriou. Sotiriou was one of the earliest researchers in the field of Christian Archaeology and the dig took place in 1916 and 1917.  To be specific, mosaic floors were found in the two chambers to right and left of the sanctuary, in the south chamber of the narthex and just outside it.

Despite their fragmentary state of preservation the mosaics show decoration of exceptional quality.  The surface is decorated by bands of interlace which divide it up into individual sections, each of which contains one of a variety of decorative motifs, combining Roman and Christian traditions.  The former is represented by features such as: interlace in the form of chains ("guilloche"), stylized round flowers (rosettes), trailing ivy, motifs resembling fish scales and water birds.  Among the Christian motifs are vine scroll from which hang bunches of grapes and vine leaves (symbol of the Christian Paradise), wreaths of laurel leaves (a well-known symbol of victory from Roman times), small crosses and other geometrical and plant motifs.  The decorative elements are distinguished by their extensive range of colours and the charm of their execution.  The mosaic uses white, black, deep red, orange, grey, a pale violet, brown, yellow, pink, blue and green.  The drawing, especially of the vine, shows a light touch and great care has been paid to arranging the tesserae to follow the outlines.