Mosaic icon of the Virgin Glykophilousa (00990) 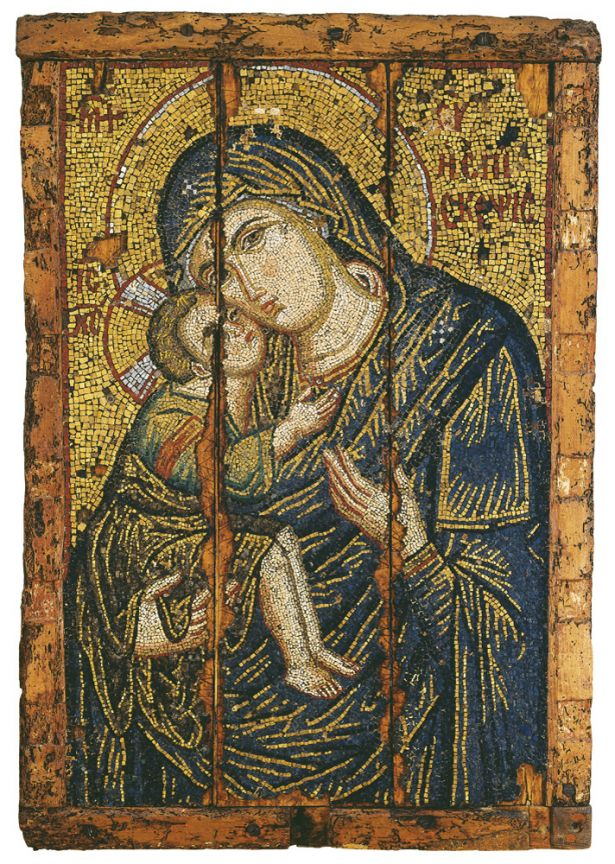 The Virgin is holding the Christ Child on her right arm, while with her left she presents him to the viewer, at the same time beseeching him to save mankind.  The Divine Child is tenderly embracing his mother, resting his cheek on hers. This particular type of the Virgin, in which the two faces are touching, cheek to cheek, is known as the Glykophilousa. This type presents the Virgin in her capacity as mother at the same time as emphasizing her role as protector of mankind.  As the mother of Christ she is listened to by her son when she pleads for the forgiveness of the world. This is also the meaning behind the inscription on this icon, which refers to the Virgin as ΜΗ(ΤΗ)Ρ Θ(ΕΟ)Υ Η ΕΠΙΣΚΕΨΙΣ that is Mother of God the Episkepsis, in other words the protection or protector.

The icon is made of mosaic.  It is a very expensive technique, rarely used on icons.  The wooden frame must originally have had some costly [metal] revetment.  In the middle of the lower frame can be seen a notch  into which a support was fitted , so that it could be processed during litanies, that is ceremonial processions through the city streets. The rest of the time the icon would have been kept on the iconostasis of a church, as a despotic icon, one of the large icons placed next to the Royal Doors.  It comes from Triglia in Bithynia, near Constantinople, and ended up in the Byzantine and Christian Museum as one of the "Refugees' Heirlooms", which came to Greece after the Asia Minor Disaster (1922) and the exchange of populations (1923).