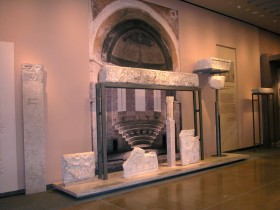 The great efflorescence experienced in sixth-century Byzantium thanks to the expansionist and ambitious reign of Justinian was followed by a period fraught with difficulties. In the seventh and eighth centuries the empire was exhausted by successive assaults by hostile forces, while the Arab conquests deprived the Byzantines forever of a large part of their eastern provinces. The population was decimated, economic activity decreased, and the large urban centers dwindled. Artistic production too had been dealt a heavy blow, especially in the provinces. The administrative and military reorganization that had begun to be implemented in the seventh century contributed decisively to the survival and gradual revival of the state.

Our knowledge of this troubled period is fragmentary on account of the limited number of material remains and works of art that have survived, as well as the paucity of our written sources. For this reason, the seventh and eighth centuries are often called the dark ages. During this time the Roman Empire of the East was gradually transformed into the medieval state we today call Byzantium.