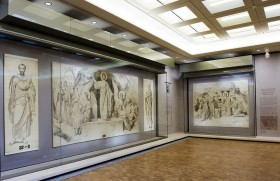 The Greek War of Independence of 1821, the weakness of the Ottoman Empire and the interventions of European powers led to the creation of the Greek state in 1830. This new state was placed under a European protectorate with the Bavarian king Otto as ruler and its initial capital in Nafplio ― later in Athens.The transfer of the capital was in line with Greek national ideology on the one hand, and the love of antiquity and Neo-Classicism of the Bavarians, on the other.

Orthodox religious painting took a decisive turn in the direction of Western-style, three-dimensional painting, which was finally accepted as the official form of artistic expression of the Greek Church. However, at the same time, more traditional trends in painting, which could be described in conventional terms as folk art, continued to be practised.