Byzantine and Christian Museum :: Permanent exhibition .::. IV. From Byzantium to Modern Era .::. IV.3. The Ottoman Conquest and the "Genos"

IV.3. The Ottoman Conquest and the "Genos" 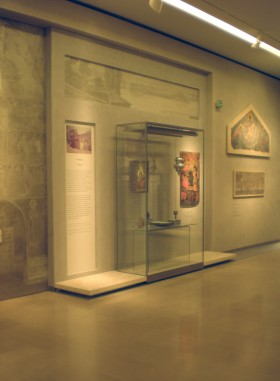 The notion of Genos (Greek ethnicity) is tied up with the identity of New Hellenism, as it emerged in the period of Ottoman rule. It does not relate to all the Rum, i.e. all the Christians in the Ottoman Empire, only those who shared both the Orthodox faith and the Greek-Byzantine tradition.

It is not concerned with one particular section of the population but many different groups, spread throughout all levels of society. It refers to the self-governing communities on Greek soil, to the Phanariots and to those who were producing intellectual or artistic works in Moldavia, Wallachia and Istanbul. It means also the Arvanites from Souli. And finally it means all those who, centuries later, embraced the ground-breaking ideas of the Philiki Etaireia (Greek revolutionary society) and the Enlightenment and demanded their freedom in the Greek War of Independence in 1821. The notion of Genos has connotations of a political and cultural nature. It is a way of differentiating between ourselves and others.

And it is this identity which, whether operating autonomously or in conditions of utter subjugation, can produce social benefits and high-quality works of art, architecture and icons, wall-paintings and objects of minor arts, textiles or printed publications.