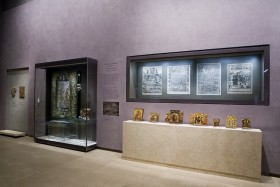 From as far back as Byzantine times monasteries were not just centres of spirituality, but also important and profitable units of production. Once the Ottomans had spread throughout the Balkans, those which  thanks to privileges and tax concessions  had kept their lands and their wealth, gradually became important economic, intellectual and artistic centres. A decisive factor in the flowering of the monasteries was the role of the rulers of Moldavia and Wallachia and later the Russians. Their support and financial assistance contributed to the monasteries development and brilliance. Some monasteries operated educational institutions, while in and around them artists workshops grew up. There was also a notable flourishing of wall painting, especially in the 16th c., of which the most famous exponents were Theophanes and Katelanos.