IV.3α. The Communities of the Romioi (RUM) 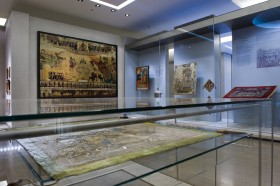 The term Romioi (Rum) designated the Orthodox populations, whether Greek-speaking, Slavic-or Turkish-speaking, living in the Ottoman Empire, on former Byzantine territory.
The Greek Orthodox populations, who came to be known as Romioi, were settled in the Greek peninsular as well as in other parts of the Balkans, in Asia Minor and in Istanbul. Once the drastic depopulation of the first two centuries after the conquest was over, they experienced a demographic surge in the 17th c., accompanied by corresponding economic and social development. The Ottoman system of government and moreover the privileges which had been conceded to the Patriarchate benefited the Greek communities, which succeeded in obtaining some degree of autonomy and self-government. This also allowed an increase in the production of works of art, mainly represented by works of a religious nature. Icons and church silver vessels, often offerings from the faithful or from guilds, precious, gold-embroidered vestments, manuscripts or printed books, all testify not just to the cultural but also the economic development of these communities.