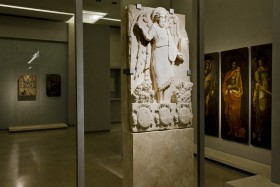 The greatest Cretan icon painters, who settled in the Venetian-held Ionian Islands, and the multitude of portable icons that the refugees from the Turkish-occupied Crete brought with them, made a decisive contribution to the development and revival of painting there in the second half of the 17th c. Thus an artistic tradition was created which was both influenced by the Cretan School of painting and open to contemporary Western artistic trends. The 18th-c."Ionian School" was the culmination of a creative journey.

Moreover the economic flourishing of the Ionian Islands, an increased emphasis on the local element in Venetian policy (especially after the loss of Crete in 1669), and the promotion of a regime of religious tolerance, designed to counter the threat from the Turks, led to a state of peaceful co-existence between Greeks and Venetians. In turn this created the conditions required for developing the arts.