Byzantine and Christian Museum :: Permanent exhibition .::. IV. From Byzantium to Modern Era .::. IV.3. The Ottoman Conquest and the "Genos"

Icon with Christ, the Virgin, the Twelve Great Feasts and Saints (02402) 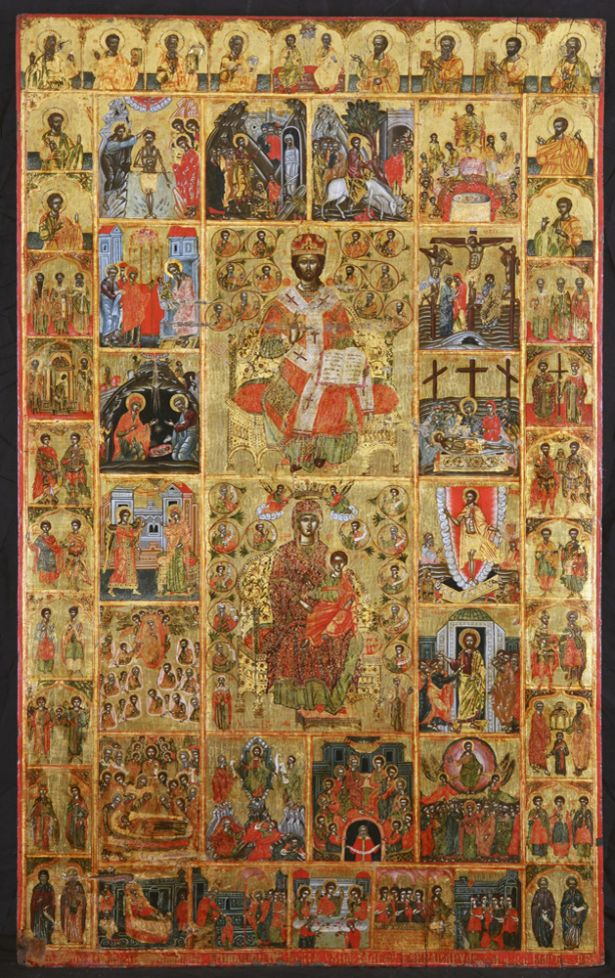 Dimensions (cm): 127,5x77,5
Provenance: Monastery of the Taxiarchs in Caesarea

The surface of the panel has been divided into small scenes [?compartments] arranged in three superimposed "circles".  At the centre are depicted Christ, seated on a throne, wearing priestly vestments (as the Great High Priest), the Vine and the Virgin, also enthroned and holding the Christ Child, with angels crowning her and prophets foretelling her role in the divine Incarnation.  Around the two central spaces sixteen smaller ones open out containing the twelve main feasts of the church's year (Dodekaorton). In the sections of the third, outer "circle" are depicted the Holy Trinity with the apostles above, saints (male and female) and archangels in pairs or threes on either side and the Nativity and the Presentation of the Virgin in the Temple, the Hospitality of Abraham and the parable of the Ten Virgins at the bottom.  Next to Christ and the "wise virgins" a prayer has been inscribed on behalf of the person who commissioned the icon, a certain Joseph from Caesarea, whose name is repeated in a second inscription in the lower part of the icon.

The icon, with its original composition, reveals an advanced knowledge of Byzantine artistic tradition. At the same time it shows that the artist has absorbed selected elements from Islamic and Western European art, which were popular at the time, in an eclectic fashion.  The icon comes from the Monastery of the Taxiarchs in Caesarea (now Kayseri) in the Pontos.  It was brought to Greece by refugees from Asia Minor. The painter of the icon is said to be Constantine Smyrnaios.