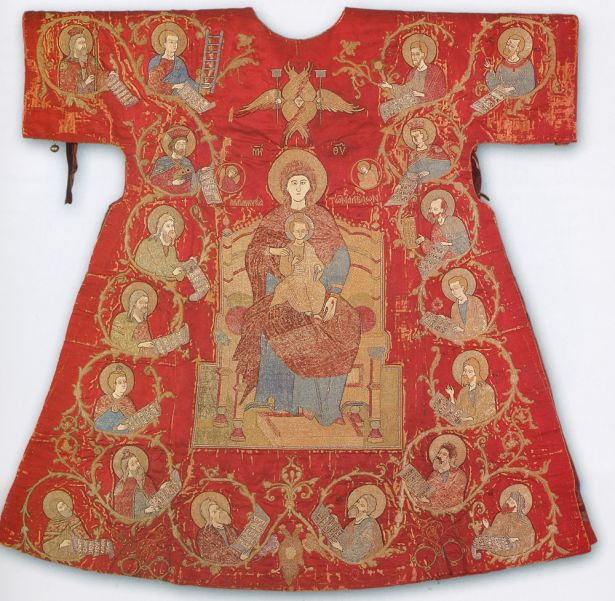 Nowadays the sakkos is the priestly vestment par excellence in the Orthodox Church, though its origins are in the imperial wardrobe [vestiario].  Its introduction into the ecclesiastical vestments is attested only from the 15th century. It was mainly used as a patriarchal garment, though it was in more general use in the late Byzantine period as an episcopal vestment.  The sakkos is a short, wide tunic in the shape of a T, with short, broad sleeves.  The two parts which go to make up the garment are sewn together at the shoulders, while the sides remain open and are tied together with cords or ribbons.
The Byzantine Museum sakkos is made of red silk with a linen lining.  It is open at the sides and joined in places with ribbons from which little bells hang down.  It has images embroidered on both sides.  On the front is the image of Christ the Vine: Christ, placed at the point where the criss-crossing branches of the vine meet, is blessing. In the rounded shapes produced by the ends of the tendrils the apostles are depicted in busts.  This subject, with its salvationist, eucharistic and eschatological content, helps to put across the eucharistic message, being a reminder of the divine eucharist (since the wine is the blood of Christ).  On the left sleeve is depicted the angel of the Annunciation and on the right sleeve is the Virgin.  On the other side the sakkos develops the iconographic subject "The Prophets Above".  An enthroned Virgin and Child are flanked by busts of the prophets in a foliate scroll.  Above the Virgin's head is a seraph holding two rhipidia.  The scene is inscribed: ΜΑΡΙΑ ΚΥΡΙΑ ΤΩΝ ΑΓΓΕΛΩΝ (Mary Our Lady of the Angels).  The composition underlines Mary's role in the Incarnation of Christ, a role which had already been foreseen by the prophets of the Old Testament.  In the lower part of the textile is a two-headed eagle, symbol of Byzantium and of the universality of the Patriarchate of Constantinople in the years after the Fall of Constantinople.
The sakkos comes from Mesembria in Eastern Roumeli (now Bulgaria).  It has been dated to the 17th century and has been attributed to an Epirote workshop.