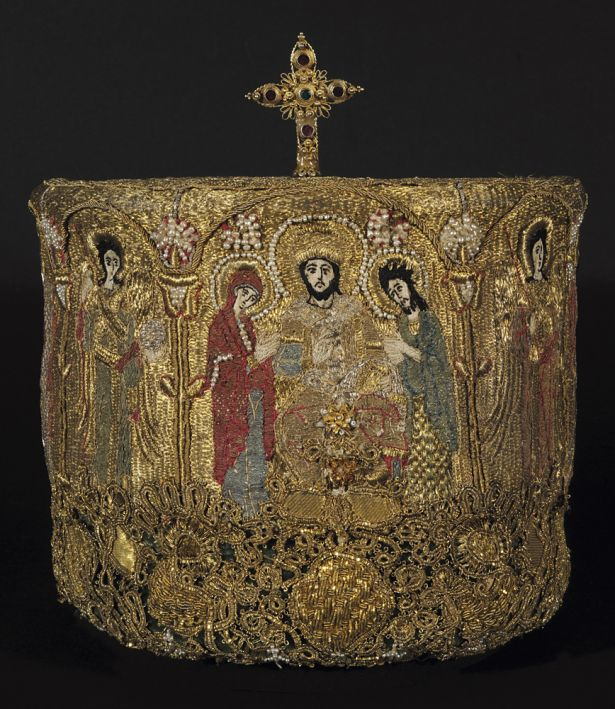 The mitre is a head covering, which was originally worn by certain patriarchs and archbishops.  In the Post-Byzantine period it came into more general use for all bishops and archbishops.  It originated in the imperial crown, as it developed in the middle Byzantine period and the shape varies in line with the variety of head coverings worn by the highest  officials.   It is worth noting that head coverings were not permitted in the Early Christian period for celebrants. Mitres are usually compared with the crown of thorns which was put on Christ's head before the Crucifixion, when he was mocked as a king.
This mitre is cylindrical in shape and decorated with gold embroidered scenes.  On the upper part the Hospitality of Abraham is depicted.  At the front, under some arcading, Christ is depicted enthroned, in the form of the Great High Priest, flanked by the Virgin and John the Baptist in a Deisis composition.  The rest of the space is taken up with full-length figures of angels and saints.  The mitre is topped by a wire cross decorated with semi-precious stones, which is screwed into a socket, while the bottom of the mitre is decorated with lace.  The attention to detail and the high-quality materials give it a striking appearance and link it with an epitrachelion from Sinope in the Pontos, which is perhaps where we should look for the workshop which made it.  It is dated to the 17th century.