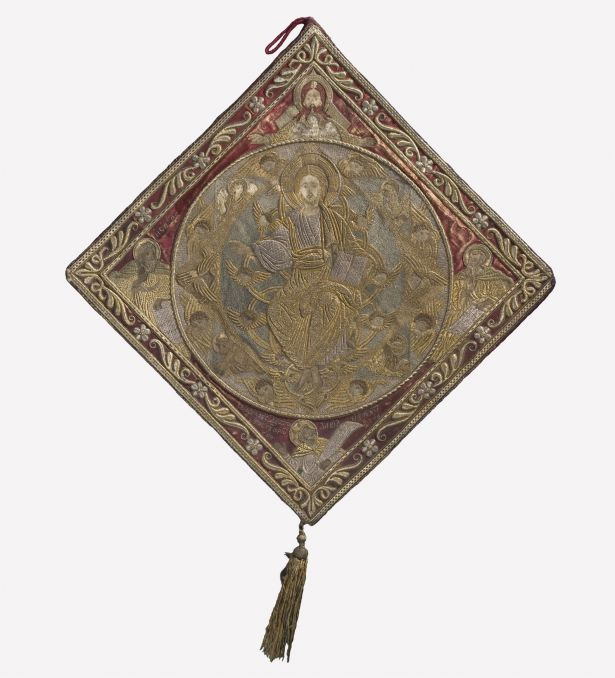 The epigonation is part of a priest's vestments, which is strung from his belt.  It is lozenge-shaped and hangs down to the knee.  It originates in the Roman mappa or mappula, the piece of material which the consuls used to signal the start of the games.  Until the 12th century it was exclusively the preserve of bishops, whereas later it was extended to officiating clerics.  It is a reminder of the towel Christ used to wash the feet of his disciples.  From the 15th century on it symbolizes Christ's victory over death and his resurrection.
On this epigonation a circular medallion is inscribed in a lozenge in which is depicted a Christ Pantokrator.  He is shown seated on a throne made of wheels and inside a mandorla, which is supported by cherubim and the four symbols of the evangelists: the angel, the calf, the eagle and the lion.  Four figures in a cruciform arrangement frame the mandorla: At the top is God with the Holy Spirit in the form of a dove, on the right the Prophet Ezekiel, on the left the Prophet Isaiah and at the bottom the Prophet David.  The border of the epigonation is formed of a band decorated with floral and plant motifs. To the left of the figure of David is embroidered a date "αχπθ" (i.e. 1689) and the signature of the embroidress Despoineta of Argyri (fl.1682-1723), who worked in Constantinople.