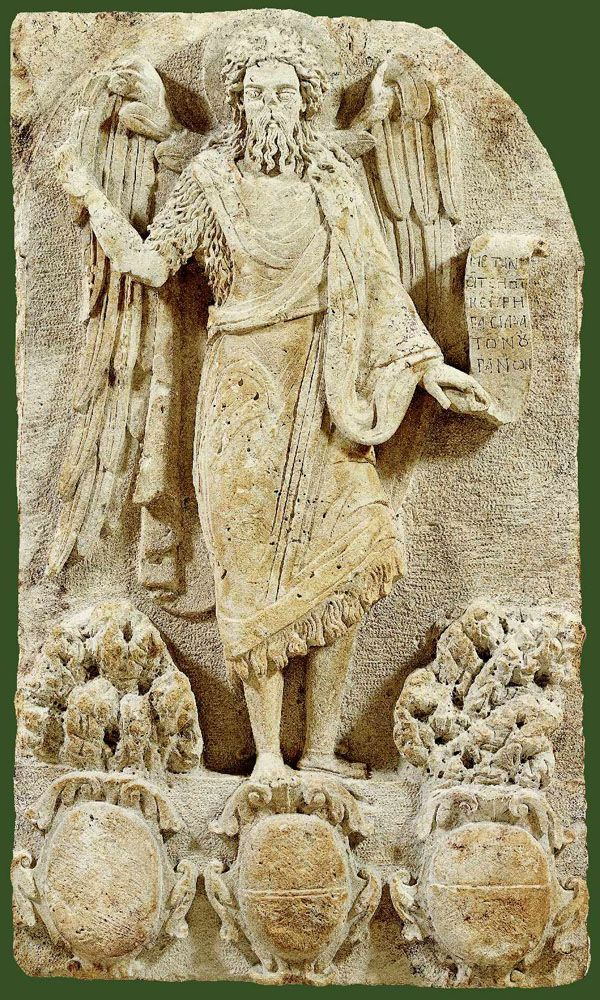 The slab comes from the Monastery of St John the Baptist in the Kastro of Zakynthos.  The saint, depicted full length between two low rocks, is frontal and winged, and blesses with his right hand while holding a scroll in his left.  The scroll is inscribed: ΜΕΤΑΝΟΙΕΤΕ ΗΓΓΙΚΕ ΓΑΡ Η ΒΑΣΙΛΕΙ ΤΩΝ ΟΥΡΑΝΩΝ (Repent [ye] for the Kingdom of Heaven is at hand1). The three escutcheons in the lower part of the slab, which have not preserved their distinctive features, would have borne the patrons' coats of arms.  The iconographic type of the winged Baptist, a creation of the Palaiologan period, has been associated with the saint in his capacity as "equal of the angels" and pioneer of monasticism.  The style and technique of the relief reflects a classicizing tendency and shows familiarity with Italian, post-Renaissance artistic movements.  The work belongs to the Venetian period on Zakynthos, where St John the Baptist was proclaimed patron saint in 1608.  It can be attributed to a Cretan or Ionian workshop familiar with Western European models.