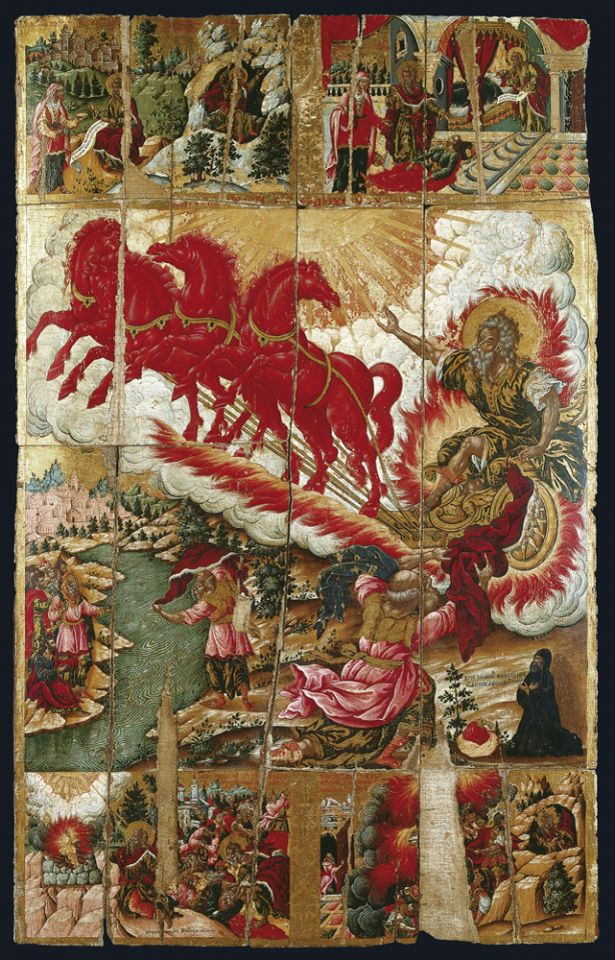 Date: 2nd half of 17th century

The icon is divided into three unequal bands.  In the central, larger one is depicted the Ascension of the Prophet Elijah to heaven.  The prophet, in an animated stance, is seated in a flaming, golden chariot which is emerging from clouds and being pulled by four galloping horses.  Lower down, his disciple Elisha is depicted with his back turned to the viewer, seizing Elijah's mantle.  On the left, on a smaller scale is the secondary episode according to which Elisha crossed the Jordan in a miraculous manner without getting wet.  In the background to the main composition a town identified as Jerusalem can be seen. On the right-hand side the patron, according to an inscription the Cretan priest monk Sophronios Faskomelosis, is depicted kneeling with his arms crossed in an attitude of supplication.    In the other two bands six scenes from the Life of the prophet are depicted: in the first space at the upper left the prophet is depicted twice, once conversing with the widow who is offering him water and bread and then, in another scene alongside the first, receiving food from a raven; after that comes the raising of the widow's dead son and then at the bottom left the prophet is killing the priests of Baal, having first managed to light a fire on an altar when God responded to his prayer, while next to that flames are coming down from heaven which envelop the "captain of fifty" and his men. In the lower left is inscribed the signature of the Cretan artist Theodore Poulakis.

The main scene copies an engraving by the Flemish print-maker Jan Wierix.  The intense palette (with pink, a luminous red and gold as the main colours), the Baroque and Renaissance elements in the depiction of buildings and the costly textiles, the lively gestures and attitudes of the figures are all characteristic of the art of Poulakis in general, though it is worth noting here that the use of Flemish prints to provide iconographic subjects is particularly widespread in the Ionian islands from the second half of the 17th century on.  The icon comes from the church of St Elijah in Ano Korakiana on Corfu.  The serious damage which has been caused to the paint surface is the result of the panel being cut into nine pieces after it was stolen from the aforementioned church.