Icon with an Allegory of the Holy Communion (02221) 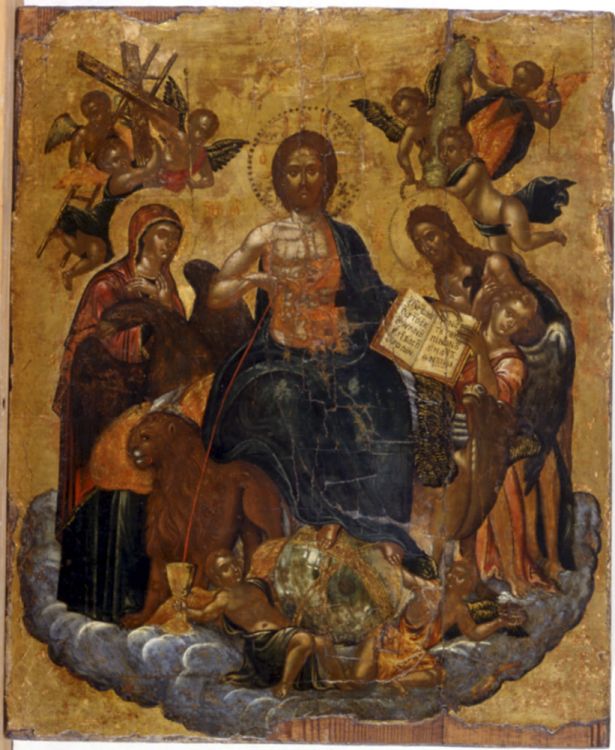 Date: 2nd half of 16th century

In the centre Christ is flanked by the Virgin and John the Baptist in a Deisis and the four apocalyptic symbols of the Evangelists: the lion, the eagle, the angel and the calf.  Christ is treading on the globe of the world, held by two small, confronted angels and is decorated with the stars and the cycle of the zodiac. He is holding a Gospel in his left hand, on which is written a passage from the Gospel of John relating to the Holy Communion, which emphasizes the eucharistic sense of the composition.  The cloak which covers Christ reveals the upper part of his body.  With his right hand he grasps the wound in his pierced side, from which blood flows and which one of the angels collects in a chalice, while a second angel, on the right, holds the leavened bread of the Eucharist. In the upper part of the icon two bands of angels hold the Symbols of the Passion: on the left the cross, the ladder and the lance and on the right the column where Christ was scourged, the nails and the sponge.

The composition of the icon, which has the inscription "Η Μετάληψις" [Holy Communion],  adds to the Deisis, in the upper part of the scene, the symbolism of the Divine Eucharist, which is depicted in the lower part of the icon with images from the Holy Passion and the Last Days (the end of the world, Last Judgement).

This high quality work displays stylistic features very close to the principles and methods of Cretan painting, at least in as far as that survived in the 17th and 18th centuries in the Ionian Islands. In terms of iconography the subject of the allegorical depiction of the Holy Communion owes its original composition to Western models. However, its structural elements, influenced by liturgical texts, are familiar to Byzantine icon painting and can already be found at an earlier period.  The icon copies in every detail another similar icon from the Monastery of the Virgin Platytera in Corfu which is attributed to Michael Damaskinos.  This artist is considered an innovator in iconography, whose creations are found mainly in Corfu and have been copied by a significant number of later icons.  The subject is linked with what is called the "Transubstantiation Controversy", which came to a head in the West in the Reformation and the Counter-Reformation and continued throughout the 17th century.  The continuing spread of Damaskinos's iconography into the 18th century shows that the issue continued to be current in the Orthodox community, stressing the use of leavened bread in the Communion  rather than unleavened.